On 12 February 2020 our J2 bilingual history class went on an excursion to Panzer Kaserne Böblingen. Arriving there, our host Angelika Anguilar the Public Affairs Specialist of the United States Army Garrison Stuttgart welcomed us warmly. Our first impression was shaped by a barbed wire fence three meters high and a checkpoint at the entry that look like a border control unit. But as we had been registered in advance, entry went smoothly and quickly.

As the premises are quite huge, we had to go by car to the high school building. While driving, our hosts already told us a lot about the installation. Surprisingly, all of them spoke German and tried to make us feel welcomed. They seemed very keen to let us have an interesting and informative day there.

After we arrived at the High School every single one of us had to sign in with our full name as all students and teachers have to do every day as well. Then, we got a tour around the school building. The school has just recently been finished and is very modern and well equipped. They do not follow the German school system but have adapted the American one in Böblingen. 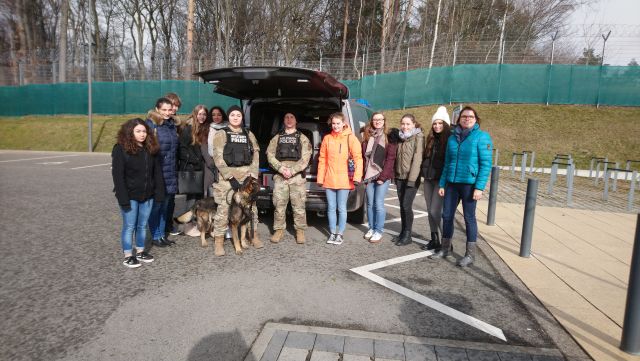 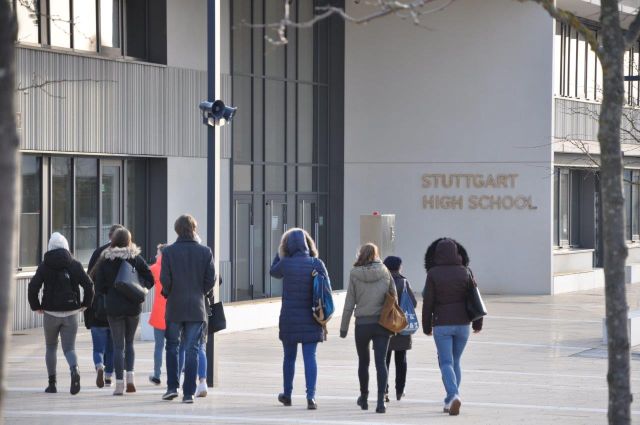 The most striking differences compared to our school were the extensive and very modern equipment and the prevailing club culture. They have a club for almost every aspect of school life, even one for shooting which was a bit strange to observe. We got an inside look into the production of the year book which takes students almost one year to finish. Furthermore, they spend around 75000 dollars to publish it and then sell it for up to 130 dollars apiece. As most students only stay for a few years at each deployment and often move  because of their parents´ jobs at the army, the year book is seen as a precious treasure for most of them to remember their time there.

Back in the extensive library where our tour had started, our host surprised us with delicious donuts. After the short break, we listened to a presentation about the role of American military in post-war Stuttgart by Theodore Sean Schulze the US Forces Liaison Officer for Baden-Württemberg. We learned more about political and military developments and how the Americans dealt with destruction in the years after the unconditional surrender of Germany. 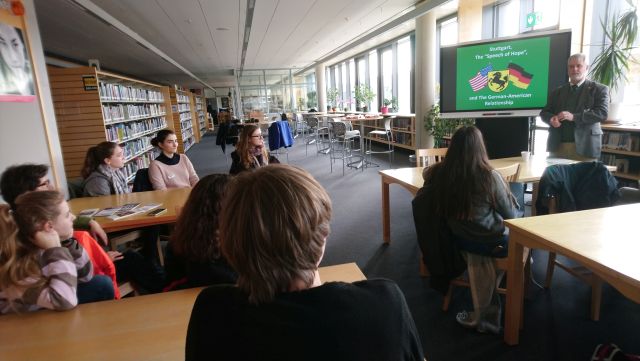 The presentation ended with an extract of the “Speech of Hope” by James Byrnes highlighting the intentions of the American government for its occupation zone. Nevertheless, he also made sure to mention both sides of the story, trying not to be too biased. The following discussion about the end of the Second World War in which we could ask a lot of questions and also question the American actions was very interesting.  All participants seemed very open-minded and interested in creating a dialogue instead of just lecturing us about the past and the present.

All of a sudden, two members of the military police our age entered the room. They gave us an insight into military life within the barracks and during deployment. Both of them were willing to answer all of our questions. At the end, the two of them led us outside and we were able to meet and even pet their dog with whom they patrol the premises. Now that we could speak to them in private, they also answered more personal questions.

Since it was already lunch time and we were all very hungry, we were driven to the food court which is quite similar to the food lounge at the Milaneo. There, we ate typical American fast food, such as Philly´s or Popeyes. At this food court – sitting among soldiers – we had interesting conversations about various topics concerning life as a soldier, differences between American and German culture or deployment in various countries. After having finished our meal, we finally said goodbye and were driven back to the train station to return to Cannstatt. It was a really impressive day and gave us an enriching insight into life at American military installations in Germany and their history. 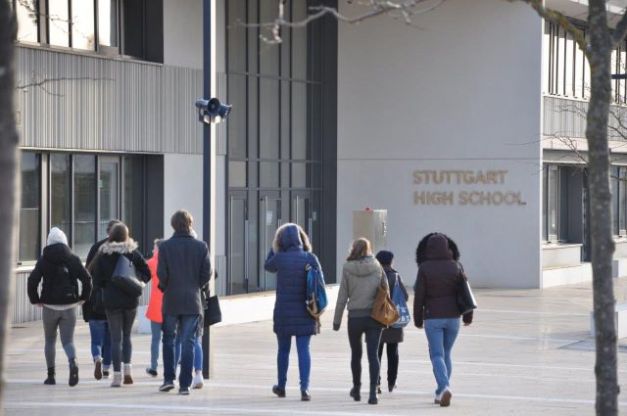